I hired a private investigator to follow & photograph me at various times over a week in Jan 07, & to then send me his ‘report.’

Reflections: due to cost, I was only able to retain his services for a limited time. Which meant he did not do much night-time surveillance, for better or worse… I found the rather banal results to be kinda hilarious – how much of the (this) ‘writer’s life’ is really really boring. Still, an interesting trial run at a poetics of surveillance, where the self & its expressions (self-portraiture, autobiography, confessional poem, etc.) are increasing crafted by other mediated means, often with our consent (i.e. what I feed ‘them’ thru my internet usage, electronic purchases, public movements, etc.) I am I because my little machine knows me…

9:15 am  – On scene at (REDACTED) St., Oakland, CA.  No activity noted.  Window coverings are closed and subject vehicle parked in driveway next to residence.

1:00 pm – No activity.  No one exits or enters the residence.  Subject vehicle remains parked as described.  Surveillance terminated.

10:35 am  – Subject vehicle parks parallel on (REDACTED) St. just north of (REDACTED) Ave., Oakland, CA.  Subject exits the vehicle and walks briskly to and enters (REDACTED) on corner of (REDACTED) and (REDACTED).

12:44 pm  – Subject observed through window standing and milling about.  Photographs of movement obtained

1:52 pm  – Subject exits (REDACTED) alone and scans area in all directions.  He is observed milling about on the sidewalk at the corner with his hands in pants pocket to protect against chill wind.  He pulls small (REDACTED) from his pocket and places in his mouth.  He is looking down at sidewalk as he walks, again with hands in pants pockets.  No discernable purpose of this activity is noted.  Subject removes cell phone from pocket and dials.  He holds cell phone to his right ear and mills about.  Unable to determine if he is actually talking with anyone or simply listening.  He is looking down and walking in an exaggerated manner. Subject places right hand over forehead and rubs the area of his forehead and eyes with a  strong squeezing motion.  Subject continues to mill about and walks several feet up (REDACTED) Ave. toward rear of (REDACTED).  He turns and walks back slowly.  His facial expression demonstrates contemplation, as he walks back toward the front of the (REDACTED), apparently taking no notice of the (REDACTED) and traffic as he strides by.  Subject reaches the front of the (REDACTED) and lifts his head to look ahead of him.  His gaze appears to be fixed in front of him as he walks northbound on (REDACTED) Ave. to the end of the (REDACTED).  Subject immediately turns about and walks slowly but with determination back to the front door of (REDACTED) where he enters at 1:57 pm and disappears from view.  Photographs of Subject’s activities are obtained. 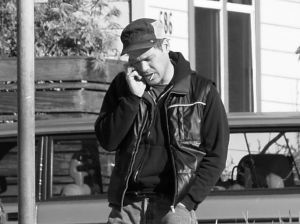 This entry was posted in Performance, Writing and tagged experiment, Performance. Bookmark the permalink.