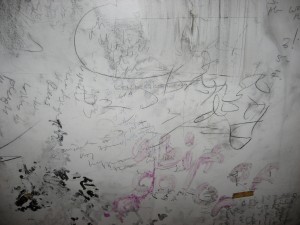 I gave myself the task of writing for 12 hours straight, foregrounding the writing body in the space of the public gallery. I would only produce writing in the moment, coming out of the conditions in the space & duration of the event (i.e. no writing ‘about’ something else, or working on ‘projects’ or thinking of something & then writing it down, no pausing or breaks, etc). Materials were: notebook, pencils & charcoal, spray paint, tape, post-its, string, tickets, a digital recorder, water, one apple.

Dillon was in a box for all 12 hours (more on this later). Natalie was similarly stationary for the first six hours.

I developed a set of tasks that I was to perform each hour, in part to keep me producing content, and in part to mark time, and in part in response to the unfolding conditions of the space, the audience, my collaborators, my body/experience, etc. These included:

s/pacing the gallery, along the walls, while improvising a ‘report’ on the ‘situation’ (composed in detective-noir genre)

producing writing on the walls, one letter at a time, through increasingly difficult (for me) physical acts (i.e., jumping over two chairs & diving at wall with charcoal, improvising next letter in sequence while in mid-air, attempting to transcribe that mark on wall, repeating this till phrases, poems, were ‘completed’ etc.)

writing on wall with white spray paint, then returning later with pencil to outline ‘invisible’ text (as if bringing out the latent ‘writing on the wall’)

five minutes of self-criticism of project, read aloud while writing it

five minutes of ‘personal’ writing, to be taped to wall & then ‘organized’ by means of string, lines, charts, etc.

five minutes responding in writing to what my collaborators were doing.

Reflections: All writers ever want is time to do nothing but write. I had 12 hours in which to do nothing but write, and it was one of the more difficult things I’ve ever done. Partially this was because the acts of writing were public, & I was interested in ‘performing’ them, embodying them, & to some degree testing how something so ‘private’ & banal & seemingly ‘easy’ (physically speaking) might function when pushed & challenged in various ways. As I grew hungry & tired my thinking changed, & the ‘content’ became increasingly focused on only the present experience – what was happening in the space, in my body, marking time, following tasks, producing writing without judging it, finding where ‘writing’ fades into drawing, marking, gesture. At times I would simply mark time by writing numbers on the wall as I lay on the floor. Other times I would ‘read’ aloud what I was ‘typing’ into an imaginary keyboard, as if to see if air-typing was the same as ‘actual’ writing. I found that given the freedom to ‘just write’ for 12 hours I worked very hard to come up with tasks & increasingly difficult constraints in order to put pressure upon the writing. I found that those tasks that required the most physical exertion raised the most interesting compositional questions for me. I found myself constantly keeping charts on the wall of “good” and “bad” marks. I liked how the gallery walls filled up with text & marks, & thus became a marker of time, the transcription of the event’s unfolding. Also knowing that none of the text would ‘last’ or be published (ie was ‘fleeting’ – less important than the process/performance?). The self-critical moments, as part of the performance itself, were helpful. They drew out the contradictions & blind-spots as they were unfolding. (For instance, I knew little about where in Boston we were, what the social/economic context of the site might be; there was also the (gendered?) dynamic of my mobility in the space vs DP & N’s immobility, my writing/speaking & their work focused on the [silent, laboring] body, etc.) During the last hour, as folks poured into the gallery from a nearby event, drinking, talking, interrupting, breaking my pencils, tying my legs together, etc., I fell down on my face and opened a cut beneath my eye. At this point all I had left to write with was the apple core, which I rubbed into my cut as I leaped up the wall to write out one letter at a time in blood and apple-meat. Needless to say, this became the most absurd (male) performance art cliche one could imagine – writing with one’s own blood, etc. At the time it seemed completely ‘natural’ – the point was to just keep writing with the materials at hand.

I still believe that content is important – that it’s not ‘enough’ to simply perform the production of writing without also thinking critically about what kinds of content come out of that. And yet the more the writing became pared down to the ‘bare’ act of simply producing ‘more writing’ the more I seemed to focus on questions of what-writing-is than on any other ‘outside’ content. (at least in the moment there were no scare-quotes, implied or otherwise, no simulation, no bringing in something already known [to me] or thought-through. only just writing, for better or worse.)

I’ll write more about this when I can find the materials that survived (we had to whitewash the walls the next morning) & any audio, as well as some comments on the work of my collaborators.

This entry was posted in Performance, Reflections, Writing and tagged Performance. Bookmark the permalink.